Custom Robo, known in Japan as Custom Robo Battle Revolution, is a 2004 video game for the Nintendo GameCube. It is a science fiction action game, as well as the fourth title of the Custom Robo series. It is also the first Custom Robo title localized outside of Japan, which was released in North America.

The story opens with a flashback from the hero's earlier life. The main protagonist "Hero," is a child whose father has disappeared. Before his mysterious departure, Hero's father gave him a watch, telling him to keep it safe. At this point, the game leaps to the present. In between the opening and the present Hero had received a letter stating that his father has just died. In honor of his father's wishes for him to become a Robo Commander, Hero sets out to do so - despite knowing nothing about robos. Later in the game, it is explained that Hero failed to join Dark Blue, a group of bounty hunters. He eventually manages to join up with another group of bounty hunters known as "Steel Hearts", where he meets Ernest, Harry, and Marcia, the owner and two employees of the business respectively. Harry teaches Hero how to command robos and helps him receive his license, which allows Hero to battle with robos legally. After a few minor errands, Hero and company discover the self-guided Robo known as 'Rahu'. Later, after passing a test and obtaining a Class S license, Rahu's past is revealed and Hero finds out that, before the time of the domed city, the world was attacked by a powerful entity - now known as Rahu. Rahu was soon damaged enough to be driven into dormancy for a long period of time but has now awoken. Hero and the rest of the police force leave the safety of the dome to defeat Rahu again, along with an organization known as the Z Syndicate, who are trying to control the entity for their own ends. After defeating the Z Syndicate, Hero meets an old friend of his father's and the brother of Marcia - a spy named Sergei. He originally joined the Z Syndicate to stop Rahu but was forced to keep an eye on Oboro, who wanted to control Rahu for his own means. Eliza and Isabella, two other members of the Z Syndicate, also wanted to control Rahu. Sergei showed Hero an old recording of his father's last message to him. In the recording, Hero's father explains that he left to form the Z Syndicate in an attempt to inform the people of Rahu's impending attack. The other members soon lost sight of his vision and betrayed him in an attempt to the seize control of the Syndicate and Rahu. Sergei then lectures them on Rahu's true history - information even Class S commanders don't even know. Centuries prior, Rahu was an invisible living entity that knew nothing but to destroy. Rahu came across a children's custom robo toy and merged with it for unknown reasons, though Harry suggests it was performing a dive. Now that Rahu was visible, the government used custom robo toys to make weaponized robos to put Rahu into dormancy. They then picked a spot with minimal damage and created a domed city for survivors to live in. They erased everyone's memories and gave them fake memories of living in the dome, using memory erasure devices. As it turns out, Hero's watch is the last memory erasure device in the world. Using the watch, Hero eventually defeats Rahu, ensuring the world's safety for the foreseeable future.

After the "A New Journey" section of the game has ended "The Grand Battle" is unlocked. Hero is told by the police squad that commander class rankings have been reorganized following the defeat of Rahu in order to encourage the training of more commanders. Everybody has been reset to a Class D License, and may improve from there by winning Grand Battle Tournaments, a series of rematches with characters from A New Journey as well as fights with new characters not previously seen. Hero learns that all criminals involved in any way with stealing the memory erasure device or attempting to use Rahu had their memories erased, and that many of them are being used as opponents in The Grand Batte. The tournament in the Z Boss' Room ends with a match between Hero and battle data of his father, and a last recording documenting his final words and advice to his son. Hero receives the Ray Legend robo is father used from a brain-washed Oboru. During the final tournament, after Hero has successfully restored his Class S status, he is told by the Chief of Police that he was the only person who had his Class changed at all and the The Grand Battle was merely an excuse to make Hero, the greatest commander in the world, stronger. Hero admits that it worked, though he's uncomfortable with this new knowledge. The plot ends with Hero comforting Marcia and promising he will return to Steel Hearts. He wins his final match with Harry, concluding The Grand Battle.

Note: Little Raiders in this game behave like Little Sprinters in the other games. However, they still have the Little Raider naming convention.

The cover and back from the Game Casing

Alternate Covering for the game: Japanese

Promotional Art for Custom Robo from the Nitendo Power Magazine

The main characters of the GameCube version 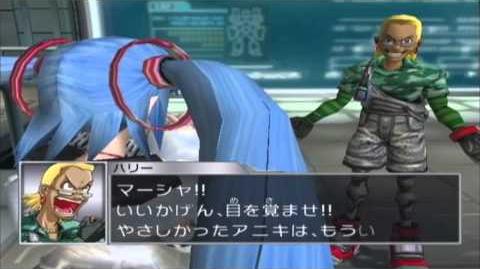 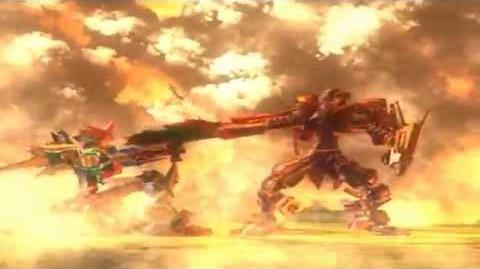 Artwork from the instruction booklet

Standard One on One Battle

Robos engaging in a 2-on-2 Battle

Robo taking knock back effect from a gun part

Community content is available under CC-BY-SA unless otherwise noted.
Advertisement